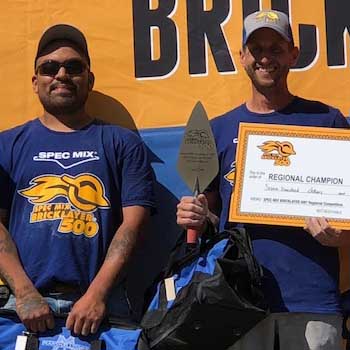 After a several year hiatus, Iowa once again played host to the SPEC MIX BRICKLAYER 500 Regional Series event. TCC Materials took on the task of organizing the competition and setting up the arena, as some of the best bricklayers in the Midwest made their way to Vinton, IA for a chance at masonry glory.

Tommy Iezek, of Maxson Masonry in West Branch, IA took home top honors and a spot in the 2020 World Championship. Iezek was happy to just see the competition come back to Iowa, and now even more glad to be the one representing his home state in Las Vegas, “I have goose bumps just thinking about it, it is a dream come true just to qualify” he said. “I’ve seen the competition before, and I’ve always wondered if I had what it takes.”

With a heavier than normal workload, Iezek and his tender, Angel Martinez, didn’t get much time to practice, only building one wall before their regional event. “This is Angel’s first time competing, so we knew we had to get at least one practice in so he could get an idea of the intensity,” Iezek said. Their company, Maxson Masonry, was behind them the entire way, giving their entire staff a paid day off to cheer them on, even offering shuttles to and from the arena.

Iezek is married with two small children, and spare time is limited, but that won’t stop him from getting in a few extra practices. He knows where he wants to be as far as brick count, now he’s ready to make it happen.