Las Vegas, NV— Thousands of spectators gathered in the Bronze Lot at the  Las Vegas Convention Center, and thousands more watched live online, as the 18th annual SPEC MIX BRICKLAYER 500® World Championship (see photos) took center stage at the World of Concrete trade show. It’s the construction industry’s biggest battle of skill, speed and stamina as masons from across North America put their craftsmanship on the line for a chance to win a portion of the event’s $125,000 purse. Each of the 26 teams, comprised of a bricklayer and mason tender, were given 60-miinutes to build a 26-foot-long brick wall using as many units as possible while meeting the list of 10 workmanship criteria that if violated lead to brick deductions from their final score.

This marks the third time Fred Campbell has won the World Championship title, the first mason to claim that honor. The 47-year-old mason was excited to win again saying, “It’s great to be back on the podium. We put in a lot of work this year to make sure we came out on top.”

Mason Darian Douthit of Providence Masonry of Miami, OK took home the title SPEC MIX TOP CRAFTSMAN®, which goes to the mason whose wall has zero workmanship deductions and is voted “most sellable wall” by the 30-judge panel. For this honor Douthit was given the keys to a new ROXOR Off-Road Sport Utility Vehicle along with $10,000 in cash and prizes. Douthit, who put up 550 perfectly laid brick, became the first ever 3-time winner of the SPEC MIX TOP CRAFTSMAN® award. “My goal was to take home the ROXOR, I was going up against such tough competitors, so it’s great to be considered one of the best.”

Standing beside first place and craftsman in the winners’ circle, Second place honors went to last year’s World Champion, Mario Alves and tender Michael Alves of A&M Masonry in Hamilton, ON. Alves laid 735 brick to win $4,000 and over $1,500 in sponsor prizes. Commonly referred to as the “Super Bowl of Masonry,” the bricklaying battle took place on Wednesday, Feb. 5th in the heart of the Masonry Madness® Day arena at the World of Concrete trade show in Las Vegas.

Before a bricklayer is eligible to compete in the SPEC MIX BRICKLAYER 500® World Championship, they must first qualify by winning one of 24 Regional Series competitions held across North America. This earns them a shot at taking down the returning World Champion or SPEC MIX TOP CRAFTSMAN® title holders. Four additional events were held in the Bronze Lot during Masonry Madness Day, rounding out 6 hours of masonry competitions. The MCAA’s Masonry Skills Challenge, MCAA’s Fastest Trowel on the Block, the  SPEC MIX TOUGHEST TENDER and the JR. SPEC MIX BRICKLAYER 500. 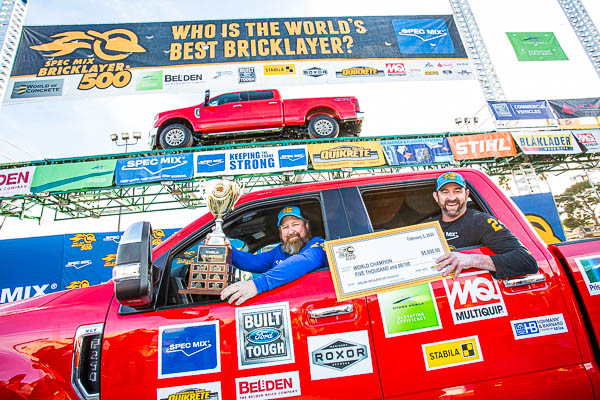 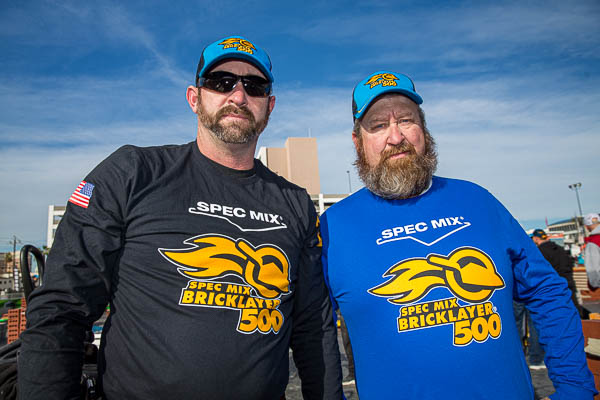 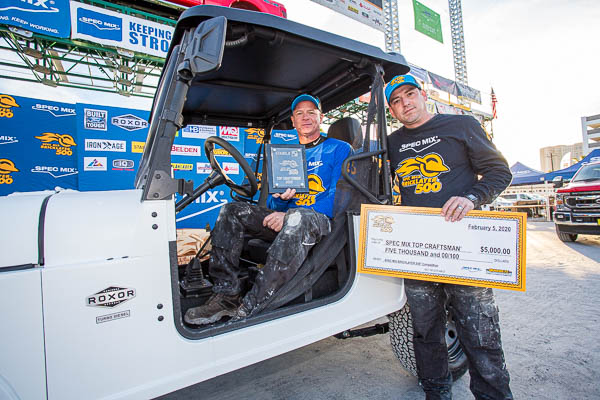