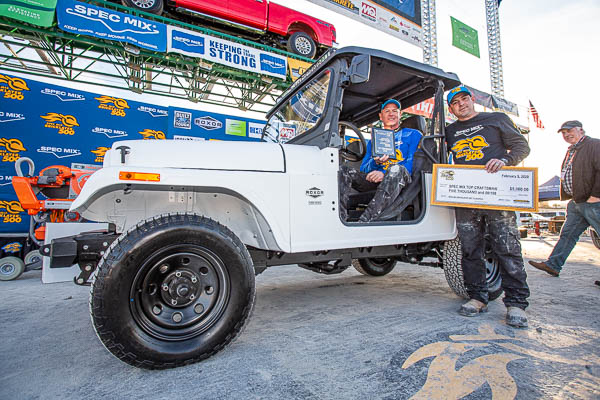 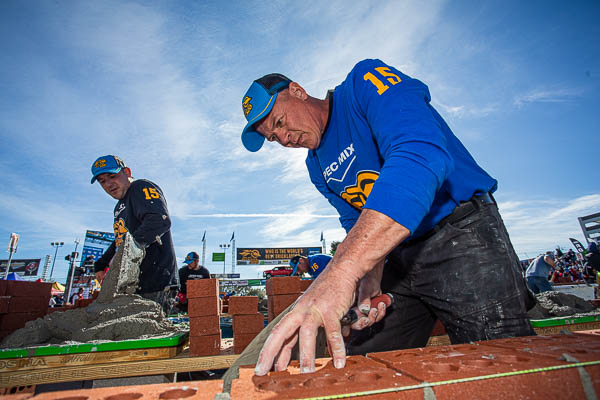 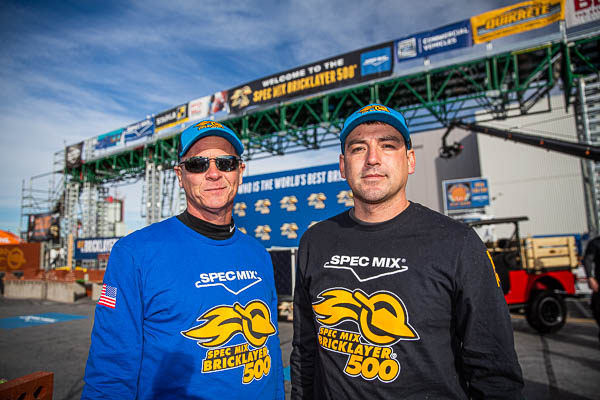 Three years after the launch of the SPEC MIX BRICKLAYER 500, the organizers realized the need to not only award the tallest wall, but also the “most-sellable.” Thus the SPEC MIX TOP CRAFTSMAN® was born. To qualify for the title a competitor must lay at least 500 brick in one hour, with zero craftsmanship deductions, and their wall must be selected by judges to be of the highest quality of any in the competition.

The additional prize category altered the strategy for many competitors, and once a fully-loaded ROXOR Off-Road Side by Side Sport Utility Vehicle was introduced as the primary prize associated with the award, masons really started to step up their game.

For the second year in a row, Darian Douthit, of Providence Masonry in Miami Oklahoma, along with his tender, Andy Zepeda, took home the 2020 SPEC MIX TOP CRAFTSMAN honor with a brick count of 550. While he was over 200 brick shy of winning first place, his wall stood out as the highest quality, and helped him to secure the victory.

“I’m getting to the age where I am slowing down. We’re trying to lay as many as possible, but we are still trying to go for CRAFTSMAN,” said Douthit. The 47-year-old mason isn’t new to the competition. The 2020 SPEC MIX BRICKLAYER 500® World Championship was his 6th shot at qualifying and marked his third SPEC MIX TOP CRAFTSMAN award (he won his first in 2016). He also came in third place in 2013 and 2016.

Douthit has owned Providence Masonry since 1993. He’s mostly known masonry as a career, and a means to support his family. He found out about the competition from an industry colleague, Bud Johnson, who tried for five years to get him to compete. He finally gave it a try and after qualifying for the World Championship in Las Vegas, he was hooked.

Normally, winning competitors have great stories about all the extra time and effort they put into getting ready to compete; not this year, as Douthit doesn’t always have the luxury of free time. With a wife and six kids (ranging from the age of 28 to 13), plus his own business, he had to rely on experience while balancing his home life. “This was the first year we hadn’t done a practice wall. We worked on building a few leads and the back wall, but that was it,” said Douthit.

With the experience of competing, plus a long career as a mason, the stage was set for Darian Douthit to leave his legacy in the SPEC MIX BRICKLAYER 500 Hall of Fame. But when he looks around his community and state of Oklahoma, he’s starting to realize the abundance of skilled masons and training programs is down. “When I first started there were more than twenty vocational schools across our area, now there are two. It’s hard to find young guys who want to get into masonry without school helping to promote the trade. All of us need to get together on this, it’s scary to see. But that’s the beauty of the SPEC MIX BRICKLAYER 500…I love the event and how it inspires the younger generation to take up the trade!”

That’s why watching 30-year-old mason Mario Alves win first place in 2019 was such a joy for Douthit. He was nothing but complimentary of the first Canadian to take home the title, “World’s Best Bricklayer.” He said, “If I had to pick one other person to win this thing it would have been him. I don’t think there has been a better winner, we need more like him.”

Darian Douthit and his tender, Andy Zepeda, will be back next year, as they automatically qualify to defend their back-to-back title.