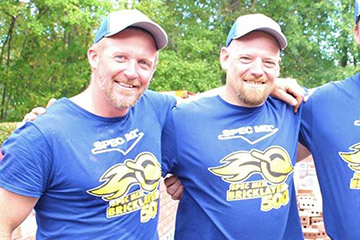 Mason Ray Byers and his brother/tender Adam Byers weren’t expecting to be competing in Las Vegas this year, after falling just short of winning the Northeast Regional Series. But due to an unfortunate injury to the winner, Mark Wells Sr., the Byers brothers will be packing their bags for Vegas with just under a month to get ready. Ray Byers is excited for the opportunity but said, “I wish I had earned it, don’t get me wrong, I’m glad to be going, but I hate it for Mark.”

Ray Byers is more than comfortable on the national stage, having qualified in 2013 and 2018. He’s ready to get back to prove himself, but admits he has to go on a diet and get himself into games shape if he wants to compete with the best in the country.

Byers started learning the trade in 1997. He was looking for a reason to get out of high school, so he found a vocational program, picked up masonry and stuck with it; a decision he doesn’t regret. Byers said, “I love it, I like the artistic stuff, the brick more than anything. It’s the art of working with arches and points, all of the fancy stuff that I really appreciate.”

At 36 years old, Byers decided to give a new company a shot to better his life for his children and girlfriend. He started up with Marsa Inc. about a year ago, and is ready to prove to his new bosses they have the “World’s Best Bricklayer,” on staff.
If he wins, Byers plans on just soaking it all in. With the short notice, he’s still in shock he’s competing in Vegas, but he thinks a new Ford truck would look great in his driveway.