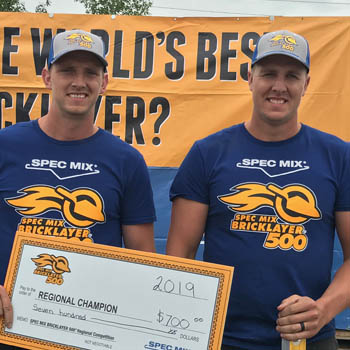 Douglas Veldman, the 2019 Alberta regional series winning mason, and his mason tender/brother, Daniel Veldman, are both journeyman bricklayers. They have owned their own business, Veldman Masonry, near Lethbridge, Alberta for over 12 years. Douglas will be 29 years old when he hits the competition arena in Las Vegas, Daniel will be 30.

For the Veldman brothers, bricklaying runs in the family. They inherited their business and skills from their father, who has always been their inspiration to be quick with a trowel. “My dad was a fast bricklayer, and when I started laying brick when I was 16, I tried everything I could just to keep up,” Douglas said.

This is Daniel and Douglas’ second time attempting to qualify in the Alberta Regional Series. Last year they fell just short and finished second. However, joining the competition wasn’t something that was even on their minds before they tried out last year. If it wasn’t for a phone call from a regional SPEC MIX sales rep who had heard about their quick bricklaying abilities, the Veldman brothers might be on a totally different path.

As it was, they caught the SPEC MIX BRICKLAYER 500 bug, and flew to Las Vegas to check out the World Championship. They studied the techniques of several masons, including the winner and fellow Canadian, Mario Alves. “I noticed his tender would stack his mortarboards on top of brick so he wouldn’t have to bend down so far,” Douglas mentioned.

That little tip paid off. Knowing what to expect, and by practicing on a mini wall at their shop, the Veldman brothers worked together to lay 627 brick, after deductions. Their efforts earned them their first trip to Las Vegas as competitors. And now they have their sights set on making their own statement, “I want to get over that 700 brick mark,” said Douglas.

Married with four kids between the ages of 6 years and 9 months, Douglas still finds a little time for himself when he isn’t working or practicing for Las Vegas. He brags about being a scratch golfer, and thinks the ROXOR Side by Side would make nice golf cart!