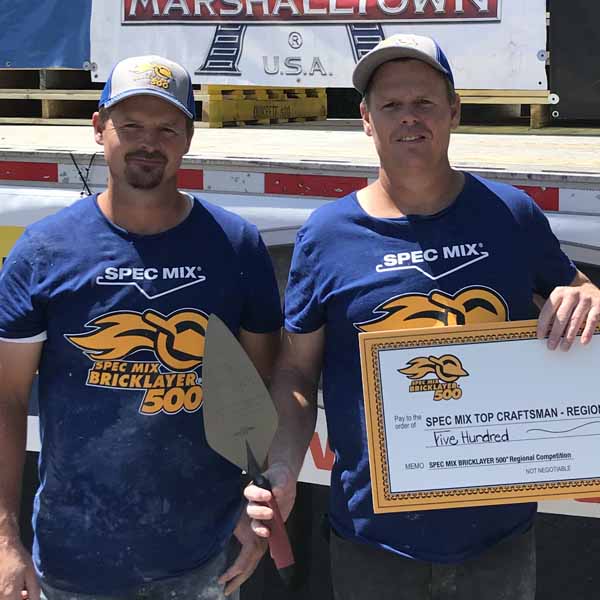 Clearfield, UT mason Brian Tuttle, 45, and his brother/mason tender, Scott Tuttle are no strangers to laying brick on masonry’s largest stage. The Tuttle’s have competed in every SPEC MIX BRICKLAYER 500 National Championship since 2004 (They alternate between mason and tender roles to stay eligible). While they’ve been competing on the main stage for the past 16 years, they’ve only recently started becoming regulars on the leaderboard. “Between 2005 and 2015 we never practiced. We went in cold and tried to live up to a dream. If you want to win you have to be willing to put in the work,” Brian said.

That work has paid off tremendously for the Tuttle’s. Since 2012 the masonry duo has won 1st place, SPEC MIX TOP CRAFTSMAN (twice), SPEC MIX TOUGHEST TENDER, and second place. It’s clear that whenever the Tuttle’s line up to lay brick in Las Vegas, they are a threat to win it all.

Masonry wasn’t always the “dream job” for Brian Tuttle. He first worked as a mason tender during a summer just after high school, he hated it. Not until he got a chance to actually lay brick did he decide masonry was his future. Two years later he started his own company, Quik Trowell Masonry, which he still owns with his brother, Scott.

Having been around since the early stages of the National Championship, Brian and Scott have seen the event evolve. Brian explained, “When it started is was all about brick, just see who can get the tallest wall with the most brick in, and it was cool to see someone lay 1000 brick in one hour. But the quality standards were terrible. Now, you have to be able to lay 700 brick and it has to look good. If it’s not right and it’s not sellable, it doesn’t promote the industry. I’ve seen the quality increase and the masons get better and better.”

Brian sends a special thank you to his wife of 15 years whom he says has supported him through his entire SPEC MIX BRICKLAYER 500 journey. Especially through the times when he didn’t come home a winner, and wasn’t always in the best mood.