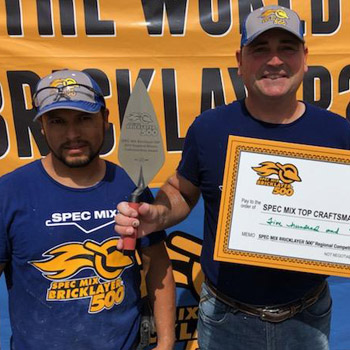 38-year-old mason Jeremy Lamb and 37-year-old tender Luis Martinez are making their debut on the national masonry stage this year. This was their second attempt at qualifying after losing out to eventual SPEC MIX TOP CRAFTSMAN Darian Douthit last year.

Lamb is the owner of CIA Masonry in Pauls Valley, OK. He heard about the bricklaying competition from a SPEC MIX sales rep who tried for several years to convince him to compete. Lamb eventually signed up because he wanted to build some moral and competition amongst his employees, and after only two tries, he proved his point.

Losing to Douthit last year was tough for Lamb, but he learned some valuable lessons by simply lining up to compete. “Weather plays a factor in the way the mud sets up,” he said, “last year it was hot so the material was hard. This year it was raining, so it was too wet. But I stayed on my leads and laid brick with enough accuracy and finesse to win.”

Married with three kids, Lamb is out to prove something in Las Vegas, and with his birthday coming just a week after the competition, he’s hoping to have a little something extra to celebrate.