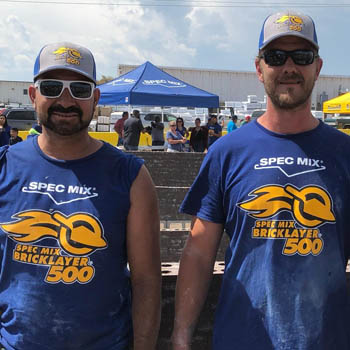 The Boll name has been a staple at the SPEC MIX BRICKLAYER 500 since 2003, the year it all started. Bob Boll took third that year, and followed up the performance by winning it all in 2004. The next four years, Bob’s brother, Mike Boll, found himself on the winner’s podium, becoming World Champion twice, and taking second place twice.

Now it is Jason Boll’s turn to etch his name in the Bricklayer Hall of Fame. The son of Bob Boll, Jason is determined to make sure he has the same bragging rights as his father and uncle. “I’m very competitive,” he said, “this year we will be putting in lots of practice.”

Jason isn’t a stranger to competing in Las Vegas, however. This is his third time qualifying for the world championship in the last ten years, but he has yet to hear his name called during the awards ceremony. Something he hopes to change this year. This year, at the Colorado regional, Boll laid 716 brick after deductions, a number that could put him as an early favorite to compete for the title.

Bricklaying has always been a part of Boll’s life, he has been in the industry for 18 years. “My dad grew up doing it, so I was born into it. I remember playing on sand piles when I was 5 years old.” Now he has another shot at bragging rights, and to do something his father and uncle have never done, take home a new Ford F250 4×4 truck or a ROXOR Off-Road Sport Utility Vehicle.