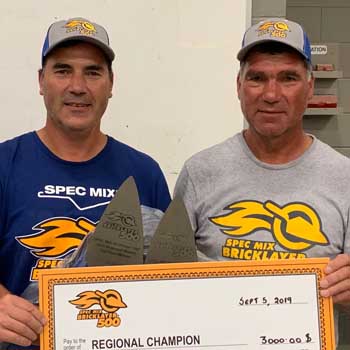 49-year-old mason Filipe Orfao, and his brother and tender Jose Orfao, are back on the World Championship stage yet again. For Filipe, this is his eighth time, six of those were with Jose. While they’ve never taken top honors, the Orfao brothers are always a threat to win it all, having taken second place in 2012 and third place in 2014. They know what it takes to win in Las Vegas, and now they have a chance to prove it and also dethrone the 2019 World Champion, and fellow Ontario native, Mario Alves. “My strategy this year is to practice and to get into better shape before the competition,” he said.

“I have a good relationship with Mario, he actually came to watch me before he ever competed, and then he just fell in love with it. He’s a nice guy, I’m so happy we both get a chance to compete in Las Vegas,” Filipe said. He went on to say, “This is a great point of pride and passion and is a privilege to be a part of. This is one of the finest trade competitions in the world.”

Filipe has been a mason for over thirty years, and has worked with his current company, RES Masonry in Cambridge, ON, for the past 21 years. Born in Portugal, Filipe is the youngest of nine brothers, who all took after the father and became bricklayers. He started working as an apprentice shortly before he moved to Canada when he turned 16, it wasn’t long that he graduated to mason, and has been improving his craft ever since.

For the Orfao brother’s this year’s strategy is all practice and getting into better shape before the competition in February.