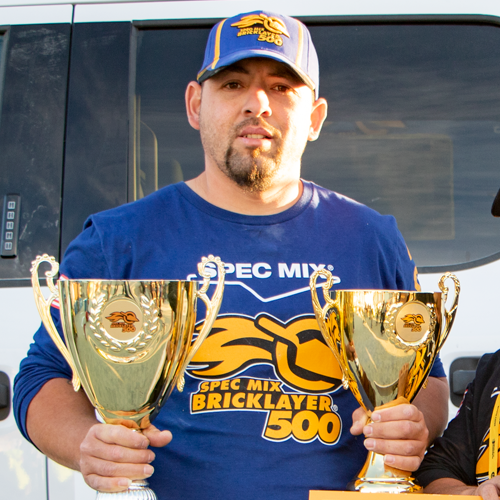 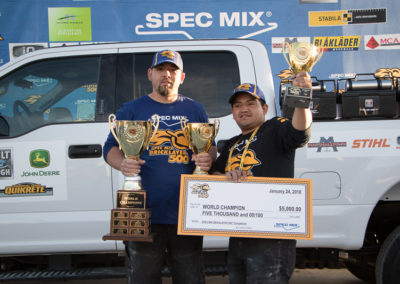 In 2003 when our SPEC MIX® team first decided to create a masonry competition that focused on SKILL, SPEED, and STAMINA, our goal was to establish an event for the entire masonry industry which showcases the craftsmanship and commitment of masons who push their capabilities to the edge every day. The event was named the SPEC MIX BRICKLAYER 500®; the strategy was to produce a competition that was entertaining for spectators, promoted the trade and above all rewarded the spirited competitors. The event has developed a strong foundation within the masonry industry as it continues to identify the best bricklayers from around the world, while promoting workforce development.

One mason has emerged as a stand out competitor, someone who, after his third attempt, finally stood above the pack as a champion. Introducing, David Chavez of Ranch Masonry in Houston, TX:

All in the Family
Chavez has been laying brick since he was 20-years-old. Now he’s 34, a veteran craftsman, and a return competitor to the Spec Mix Bricklayer 500®. He picked up the trade from his father and older brother, who have been masons for most of Chavez’ life. It was his brother, Juan Carlos, with whom he credits as the driving force behind his journey to becoming the “World’s Best Bricklayer.”

Third Time’s the Charm
When David Chavez first saw the Spec Mix Bricklayer 500® in 2013, he immediately set a goal to compete in the event. Chavez qualified in 2015, but fell short of placing. That failure only further fueled his fire for sport. Chavez clawed back, and in 2017 he won second place, and took home a nice prize package. Yet again, he wasn’t satisfied. One year later, Chavez is crowned champion, and will have an opportunity to defend his title in 2019.

Practice Makes Perfect
Chavez and his mason tender, Miguel Contreras, displayed teamwork and passion as they worked in tandem to lay 698 brick, with no deductions, in only 60 minutes. It wasn’t an easy task, as Chavez and Contreras prepared themselves physically and mentally by building practice walls similar to ones in the event.

Supporting the Industry
The Spec Mix Bricklayer 500® does more than offer entertainment during the World of Concrete in Las Vegas. It offers an opportunity to be recognized for hustle and quality craftsmanship amongst your peers in a profession that may go otherwise unnoticed. Chavez made the comment, “This is a one of a kind event that highlights what we do every day in the field. It seems to draw more people each year and continues to promote our industry especially to the younger generation.”