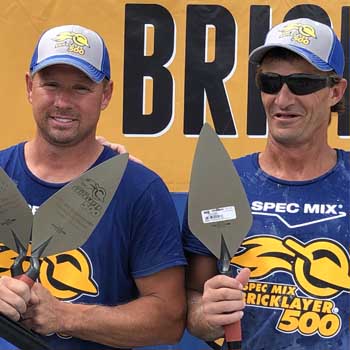 The 2020 SPEC MIX BRICKLAYER 500 will be Brian Wade’s third appearance on the World Championship stage. The 44-year-old mason from Stanton, KY and his tender, Brian Mullins, had a great showing at the East Tennessee regional, laying 624 brick while also taking home the regional TOP CRAFTSMAN prize.

Wade got his start in the trade as a tender, but quickly learned to lay on the wall after a few short months. He has been on the wall ever since.

Getting ready for this year’s World Championship will be no different than it’s ever been for Wade and Mullins. Their goal of 750 could easily win them spot on the podium, a place they have been before, taking third overall in 2015.

Brian believes this event fosters brotherhood between masons, informs the public about new products, and encourages young people to consider masonry as a career.