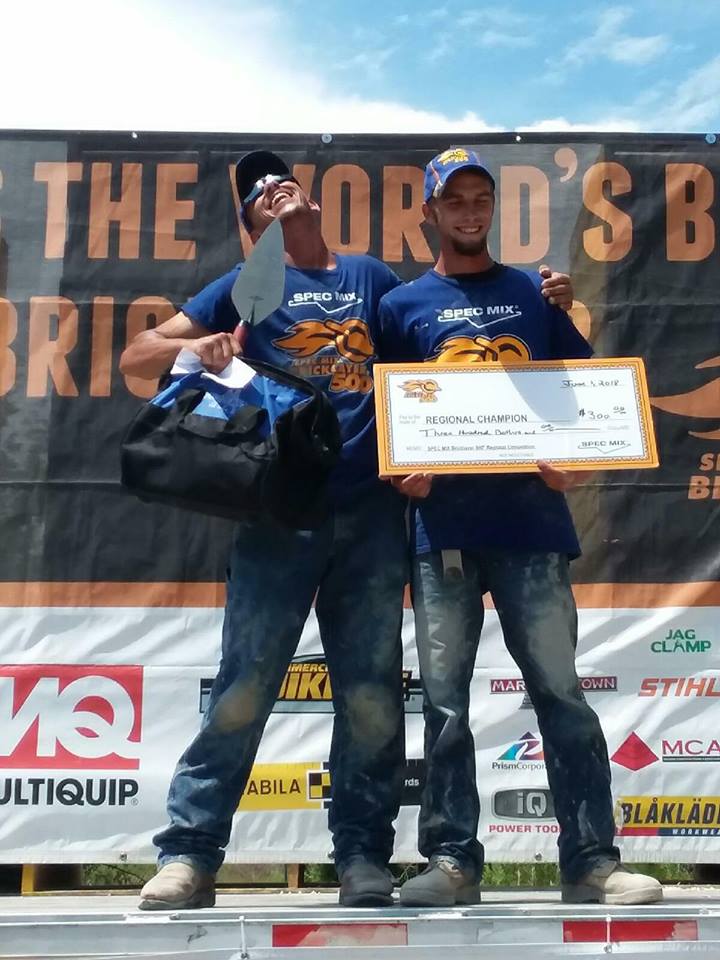 Adam White has be

en hustling as a mason since July 23rd, 1999. A date he remembers all too well. White recalls, “It was the hardest day I’ve ever had. “ He was looking for a job, and a friend asked him if he wanted to assist on a brick house. He hasn’t looked back since. “It was something that wasn’t easy… it’s a hard trade, it’s a hard job, but with that comes respect and recognition that not everyone in the world can do this job… I take a lot of pride from that,” White said. Adam has traveled quite a bit in his life. He was born in Anchorage, Alaska and his father was in the Air Force. 25 years ago, when he landed in Panama City, Florida he took the opportunity to get settled. White is now married with two children. His daughter Bianca is 13, and his son Taylor is 14. Taylor will be celebrating his 15th birthday during the worldchampionship event. White remembers hearing about the SPEC MIX BRICKLAYER 500® in passing, but he never gave it much consideration. That was, until 3 years ago, when his boss, Mike Brunette of Brunette Masonry, talked him into participating in his first regional competition. He didn’t win, but he enjoyed the process, and couldn’t wait to give it another shot. To keep his competition skills sharp, White would race a few guys at work, mostly for fun, but it also served as great training. Apparently it worked; in his second try at the Florida regional, Adam White and his mason tender Mike Russ took first place, with a brick count of 480. They will represent their region in the 2019 SPEC MIX BRICKLAYER 500 World Championship in Las Vegas, Nevada and compete for over $125,000 in cash and prizes and the chance to take home a 2019 Ford F250 4×4 truck. Last year’s world champion, David Chavez, reached out to congratulate White on his achievement. Building a rapport with fellow competitors is a common theme with the SPEC MIX BRICKLAYER 500. For someone stepping on to the national stage for the first time, the call from Chavez showed the magnitude of this internationally-recognized event. “I think this competition is something we need in the trade,” said White. “I think this is something that is good to give exposure to the new kids…To try and get kids interested in construction again. This is the mason’s version of the Super Bowl.” White’s tender, Mike Russ, is an apprentice with Brunette Masonry. He was chosen because White wanted to introduce him to the competition to try and drive him and to get more excited about masonry. Of all the people he works with, White felt like Russ would gain the most from the experience. After the win, White rewarded Russ with $100 of his $300 earnings, and will have him by his side next January on their free trip to the World of Concrete show in Las Vegas to battle for the title, “World’s Best Bricklayer.”