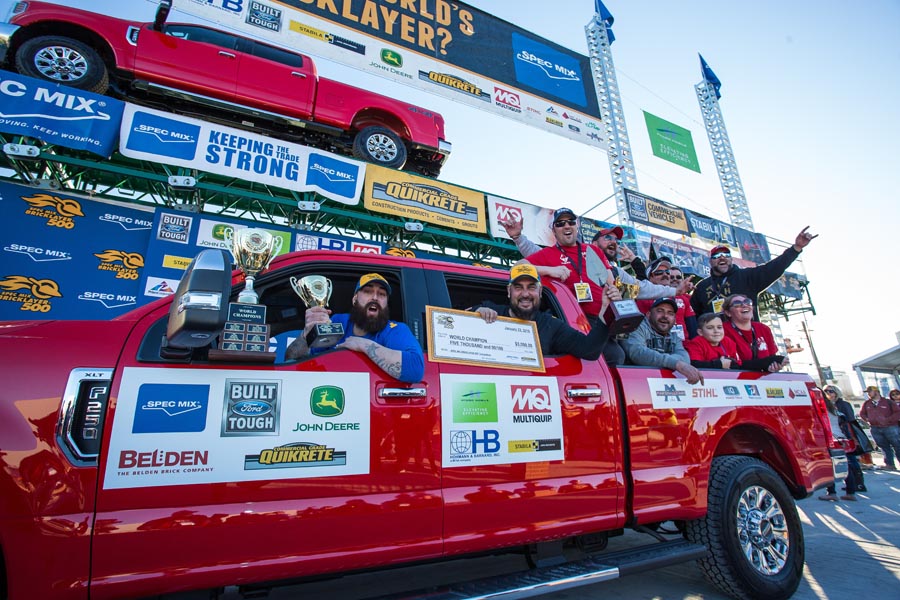 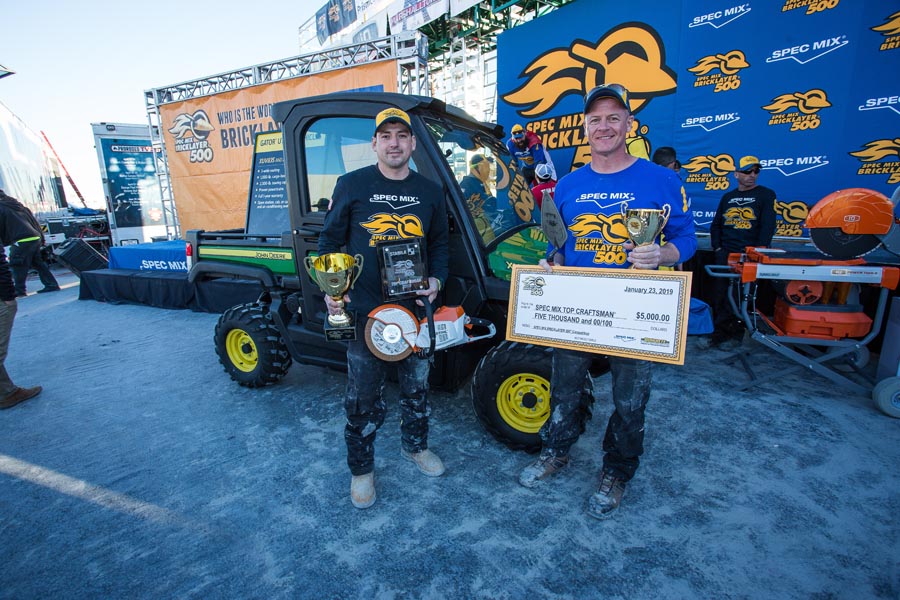 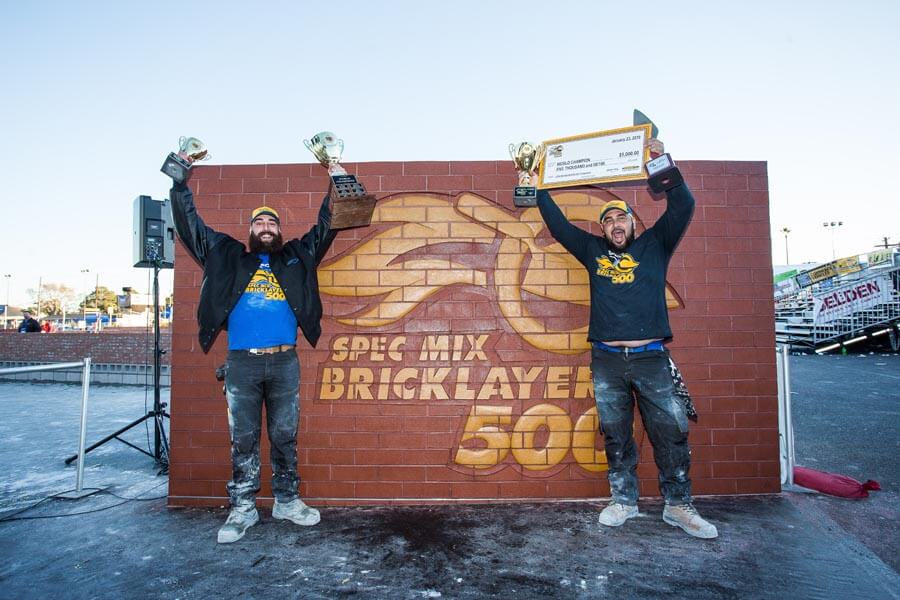 Las Vegas, NV—In front of the largest crowd in the 17-year history of the SPEC MIX BRICKLAYER 500® World Championship (See Photos), Mason Mario Alves of A & M Masonry in Hamilton, Ontario won big. Mario claimed the crown “World’s Best Bricklayer.” After 60-minutes of laying bricks against 26 other world-class masons, the 30 year old put up a wall with a brick count of 760 perfect brick that earned him a 2019 Ford F-250 XLT 4×4 truck, an Essick EM120 HYD mortar mixer on top of $10,000 in cash and prizes. It was his third time qualifying for the championship event in Las Vegas. With the help of his brother mason tender Michael Alves, Mario delivered his best performance in an arena packed with thousands of spectators.

Of the 27 bricklayers and mason tender teams that competed for the event’s $125,000 purse, Mason Darian Douthit with Providence Masonry, Fairland, OK claimed the next highest ranking title, the SPEC MIX TOP CRAFTSMAN®. The event veteran claimed a 2019 John Deere Gator™ XUV 835 and another $10,000 in cash and prizes for his efforts. Darian (age 47) laid 537 perfect brick which a 30 judge panel agreed was the “most sellable” wall. A mason for over 30 years he also won the TOP CRAFTSMAN® title back in 2016. Darian’s mason tender was Andy Zepeda. 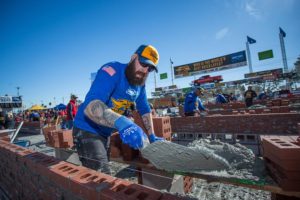 Standing beside first place and craftsman in the winners’ circle, Second place honors went to Cole Stamper of Mason Structure in Lexington, KY. A mason for 20 years, Cole laid 749 brick with no deductions to win $4,000 and over $1,500 in sponsor prizes. His mason tender was Jeff Becker.

Rounding out the pool of winners was third place Juan Cabral of Phoenix Masonry in Denver, CO. Juan (36) laid 732 brick to claim a check for $3,000 plus $1,500 in prizes. Juan’s mason tender was Jose Limon.

Kicking off the bricklaying action was the SPEC MIX TOUGHEST TENDER® competition. Twenty-seven mason tenders raced to stage all the materials used during the bricklaying event. Mason tender Charlie Cheatham with United Masonry in Cleveland, OH was named TOUGHEST TENDER, and collected a check for $2,500 and $1,500 in prizes. Charlie recorded a winning time of 13 minutes 52 seconds (WR – 11 minutes 7 second, set in 2005). Established to show the value a mason tender brings to a mason, it’s a crowd favorite that tests the speed, endurance and accuracy of a skilled laborer.

Commonly referred to as the “Super Bowl of Masonry,” the bricklaying battle took place on Wednesday, January 23th in the heart of the Masonry Madness® Day arena at the World of Concrete trade show in Las Vegas. Before a bricklayer is eligible to compete in the SPEC MIX BRICKLAYER 500® World Championship, each competitor must qualify by winning their Regional Series competition. This earns them a shot at taking down the returning Champion or SPEC MIX TOP CRAFTSMAN® title holders.

The SPEC MIX BRICKLAYER 500® initiative was created in 2003 to promote masonry construction while accentuating the craftsmanship, pride and passion that masons dedicate to their work. It’s also a means for SPEC MIX®, its sponsors and supporters, to give back to the masonry trade and strengthen its future. Over the years the event has evolved into an industry movement that is used as a tool for recruiting skilled labor and workforce development programs. The fierce competition, quality of craftsmanship, and the growing annual crowds, is evidence that the SPEC MIX BRICKLAYER 500® is uniting the industry and infusing energy into a craft that commands respect and admiration.